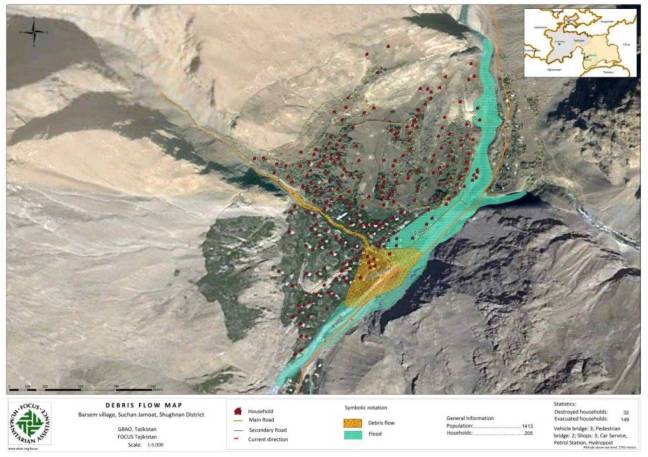 Please, be informed that on July 16, 2015 a severe mudflow triggered by glacial melt amid abnormally hot weather in Tajikistan has affected the village of Barsem and Kolkhozabad in the Shugnan district of Gorno Badakhshan Autonomous Oblast (GBAO).

The mudflow carrying with it the mass of slurry, huge rocks and uprooted trees formed a giant dam blocking the Ghund River. The river returned back and the water is approaching the village of Tang, where the Pamir-1 hydroelectric power plant (HPP) is located.

Today the geography of the natural disaster has greatly expanded and it includes territories of Barrushan, Bartang, Vanj of GBAO and other part of Tajikistan outside the Pamirs’ borders. And there is no guarantee that the scale of the tragedy will not increase. As of now, the situation remains uncertain and serious.

Despite the fact that a coordination unit was established between international organizations in cooperation with the government of Tajikistan, there is still a great deal of effort required to bring the situation back to normal.

As a result of the natural disaster in the Pamirs, some 70 houses have been partially or completely destroyed, cemeteries and sown areas flooded, two kilometers of the road, as well as power lines in the towns of Barsem and Kolkhozabad remain under the water.

According to official data, the total damage caused by the disaster amounted to more than 3 million dollars in the Pamirs alone, and approximately 100 million dollars nationwide. For one of the poorest countries in Central Asia, this is a very substantial cost.

Around 500 Ismaili brothers and sisters have been uprooted and are currently in a tent camp in the town of Manem in Shugnan district. There are 5 to 10 people living in each tent. Every day, local authorities, international organizations and hundreds of volunteers bring them clean water and hot meals.

Various bank accounts have been opened countrywide which are receiving funds from organizations and individuals to purchase necessary goods to be sent to the affected areas in GBAO.

Pamiri Ismailis outside Tajikistan have also been raising funds to be sent to Khorog to responsible organizations and civil society groups. In this context, the members of the Pamiri Ismaili Jamoat in Washington DC have also launched a fundraising initiative amongst Tajik Ismailis living in Washington DC area, New York and other states. However, we would be more than happy to receive the support of other brothers and sisters outside Tajik Ismaili Community.

Below is the link to the paypal account for the foundation to make donations. Please circulate the e-mail or the link among our brothers and sisters in the US and Canada.

Donations can also be made by Direct Deposit to the following account:

For those of you who are not familiar with the organization, please note that the Foundation is a charitable organization formed under 501(c)(3). It has been functioning since 2008 with a goal to promote and preserve the culture, language and history of Pamir and its people.

According to the Provincial Disaster Management Authority, as many as 70 more houses were demolished in the flood-hit areas in Chitral today. Rains and floods have now washed away more than 300 houses, 25 mosques, bridges, educational institutions, communication equipment and several acres of crops in Chitral.

Floods wash away life in Chitral

CHITRAL: Massive rescue and relief efforts are under way for those marooned in the raging waves of flash floods that have affected swaths of land in Chitral…

32 dead in Chitral as floods continue to wreak havoc in …

CHITRAL: Death toll from flash floods rose to 32 on Sunday as seven more people lost their lives during the last 24 hours.Floods triggered by torrential rai…

PESHAWAR, Pakistan — Heavy monsoon rains lashed an already-deluged northern Pakistan before dawn Saturday, as rescuers found the bodies of another 24 people killed by the flooding inundating parts of the country, police said.

The latest fatalities in Chitral in Pakistan’s Khyber Pakhtunkhwa province brought the number of deaths blamed on the flooding this week to 42 nationwide.

Local police official Abdul Qayyum said that rescuers in the past 24 hours found the bodies of 24 people in the rubble of homes around Chitral.

He said at least 30 people have been killed in Chitral since Sunday, when flash floods hit the region, affecting some 300,000 people and destroying bridges, roads and homes.”

“We are badly affected by floods in Chitral, all roads are blocked, people cannot travel and food insecurity will get raise in future in place like Broghil. Many houses are washed away by floods, bridges, even human lives lost and people require supports from any one. We have suffered losses in million dollars and went back 20 years.

FOCUS Humanitarian Assistance and Army has been supporting but it is beyond their financial and human resources. The Prime Minister, Imran Khan and Chief Minister have paid visit to the Chitral but no one can composite the losses occurred to the families. Homes have been washed away, lands, agriculture, gardens, fruit trees and people more than 500 households are in tents and roads are blocked and will further create issues for other valleys to get food items from main town Chitral and it has been such … [garbled]

We need cash support for BYLSO (Broghil Yarkhun Local support Organizations), being the local single organizations need to provide food items for poors and we cannot able to receive direct food or clothes due road blockages and you can upload the vedioes, reports on Chitral flood from Pakistan news channels and other source.. Visit chitraltoday.net and chitraltimes.com and other sites for detail.

There are two passes Via Darkhot, Yasin valley of Gilgit 10 hours trekking by foot to broghil and another Via Ishkoman valley two full days trekking to Broghil.. I cannot access directly by jeep .. but i need support to take with me to my valley for the affected families and people who require like basic three times food items.

This current crisis exasperates an ongoing crisis that began last fall:
“Since August 16, torrential rains and flash floods have wrecked havoc in the scenic valley of Chitral, which is located in the extreme northeast of Pakistan along the Afghan border.

Everyone in Chitral is affected | ChitralToday
CHITRAL: Since August 16, torrential rains and flash floods have wrecked havoc in the scenic valley of Chitral, which is located in the extreme northeast o…
http://www.chitraltoday.net/everyone-in-chitral-is-affected/

A detailed look at the Broghil Valley Chitral Pakistan – its geography, climate, flora and fauna.

Read the complete proposal by Umar Rafee on the I.A.D.C Inc opium addition rehabilitation project, “Proposal for the Rehabilitation of Opium Addicts in Broghil Valley.”

The Source of the Oxus River:
A Journey to the Wakhan Pamir & Across

“There are few treasures of more lasting worth than the experiences of a way of life that is in itself wholly satisfying. Such, after all, are the only possessions of which no fate, no cosmic catastrophe can deprive us; nothing can alter the fact if for one moment in eternity we have really lived.” Eric Shipton

For fifteen years, they coauthored and contributed to several trekking, hiking and travel guidebooks for Lonely Planet Publications and received a National Outdoor Book Award.
Their love of mountains extends from the Sierra Nevada to Pakistan and Afghanistan where they have reconnoitered new trekking routes and crossed dozens of major passes and glaciers in the Karakoram, Hindukush and Pamir during the past thirty years, logging more than 10,000 kilometers, 60 passes, and 50 glacier traverses. Two of their expeditions were supported by Shipton-Tilman grants from W.L. Gore & Associates.

John Mock, Ph.D., is a South Asian scholar and anthropological linguist who specializes in South Asian languages and literature. His area of expertise is Wakhi language and culture, and the folklore of the Pamir / Hindukush / Karakoram / Himalaya ethnolinguistic region. His main research is on the oral traditions of the Wakhi people of northern Pakistan, Afghanistan, and Tajikistan and he has received major support from the Fulbright-Hays Fellowship program, the Christensen Fund, and the Fulbright Senior Scholar program. He taught Urdu and Hindi at the University of California, Santa Cruz. 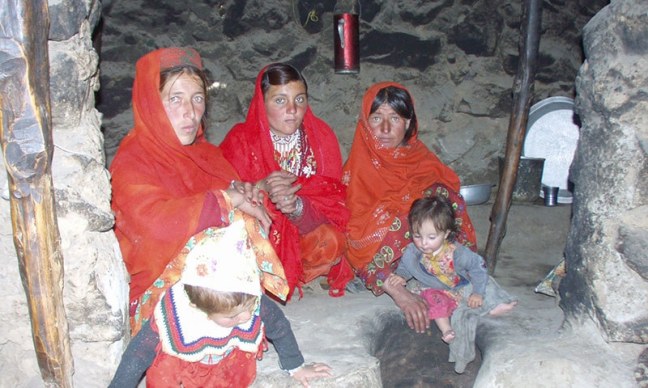 The journalist Sirajuddin has published an article in DAWN, a newspaper and website in Pakistan, titled “In Chitral, home is the opium den for women and children braving cold”

He speaks eloquently of poverty and deprivation and the consequences of opium addiction used to fight the bitter cold.

It is full of exquisite photographs and videos of the Gilgit-Baltistan and Chitral areas of Northern Pakistan.

Lovely photos like these do belie the fact that this is also a harsh and cold region in winter with poverty and large social issues that are a great burden on the inhabitants.

Enjoy these images, but then learn more about the I.A.D.C. Inc. mission and how you can help.

We want to share this excellent article about the daily lives of the inhabitants of Broghill Valley and one of their pasttimes, the seldom seen yak polo!

Our mission is “Educate for rural development, build at the grassroots level, create self-sustaining livelihoods & improve the quality of lives for the profoundly impoverished, village by village.”
CLICK HERE TO HELP